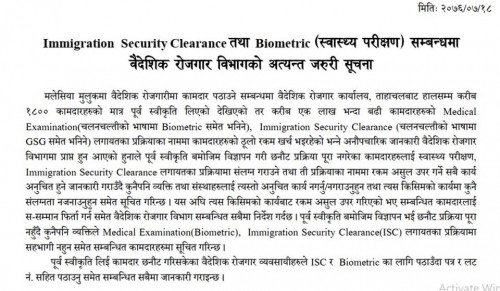 After a major crossborder investigation by this newspaper, Himal Khabarpatrika and Malaysiakini last year that exposed collusion between corrupt Nepali and Malaysian officials and private companies to charge workers exorbitant fees, Minister of Labour Gokarna Bista stopped Nepalis from going to Malaysia for work in May 2018. There are about 400,000 Nepalis working in Malaysian palm and rubber plantations, factories and service industries. The investigation revealed powerful Malaysian businesses with political protection in the Barisan Nasional coalition of former Prime Minister Najib Razak worked with influential politicians, bureaucrats and middlemen in Kathmandu to cheat Nepali workers.The Malaysian government, private companies and their Nepali affiliates took more than Rs5 billion (US$ 450 million) from over 600,000 Nepali workers between September 2013 and April 2018, the investigation showed. This did not include recruiters’ fees and plane tickets the workers also had to pay.After that expose, Minister Bista signed a landmark MoU with his counterpart, Malaysian Minister for Human Resources M Kulasegeran, in 2018. The agreement required employers to pay for visa fees and air tickets of Nepali workers, who will now be guaranteed salary payments the first week of every month. However, it was not until the technical details were worked out by a Joint Working Committee in Kuala Lumpur last week that the door has opened for Nepali workers to resume working in Malaysia.The major sticking point last week was Nepal’s demand to increase the 37 institutions the Malaysians had recognised for medical tests for workers to 122 all over the country. The Malaysians will send a team to audit the additional facilities in November. During the negotiations, it was also agreed that Nepali security guards would also get the same deal – a point that had stalled previous talks. “Our overall migration governance effort is to reduce the unnecessary burden on migrant workers while providing a level playing field for all private stakeholders,” explained Joint Secretary Ram Prasad Ghimire of the Ministry of Labour, Employment and Social Security. “We wanted to decentralise medical tests to make it more convenient for our workers.” Ghimire, who led the second Joint Working Group Meeting in Kuala Lumpur last week said the flow of Nepali workers to Malaysia could now resume. Photo: MINISTRY OF LABOUR EMPLOYMENT AND SOCIAL SECURITYThe Nepali team persuaded the Malaysian side that it was unfair that workers had to spend up to eight months of their two-year contracts just to pay off fees and ticket cost to get to Malaysia. Nepali recruiters will now be paid half-month salary of the workers as finder’s fee by Malaysian employers.The Malaysia-Nepal agreement has set a precedent for migration related reforms in Nepal and the region, and laid the basis for agreements that Nepal signed recently with the UAE and Mauritius. Indeed, a writ petition to the Bangladesh Supreme Court against a cartel of 10 recruitment companies sending workers to Malaysia cites the Nepali Times article last year by Ramu Sapkota and Alyaa Alhadjri that exposed collusion between Malaysian and Nepali officials and companies in overcharging workers, and recognises the Nepal government’s efforts to break such syndicates. In its recent verdict, the Court instructed the Bangladesh government to create an inter-ministerial committee to investigate why only those 10 firms were allowed to send workers to Malaysia. Nepal’s Minister for Labour, Employment and Social Security Gokarna Bista told Nepali Times: “There are very few countries with such iron-clad safeguards for workers, and this Nepal-Malaysia agreement could be a model for migrant worker agreement in other countries as well.” (See full interview below)However, experts say that despite the agreement the real challenge now is to implement the agreement in letter and spirit so that Nepali workers going to Malaysia are not cheated again. Legacy policies, past practices, deep-rooted vested interests and political pressure from recruiters and private companies involved in the visa and biometrics racket could still render this well-intentioned policy ineffective. Recruiters who have not been able to overcharge workers going to Malaysia for a year could be waiting to resume cheating to recoup their losses. Nepali workers could also lose out if Malaysian employers do not have to bear the cost of workers from labour-supplying countries like Indonesia or Bangladesh. Nepali workers may be forced to pay fees in order to keep their jobs. A concerted effort with strong monitoring from both governments will be necessary to implement the MoU, acknowledged Minister Bista, adding: “Ultimately our goal is secure, safe, and exploitation-free quality jobs overseas for our citizens. We are not going to be driven by how many go abroad to work, but how much they earn and how well they are treated.”